This Is Africa – Absolutely Lekker – Day 3 was Bushbuck on the Cards? 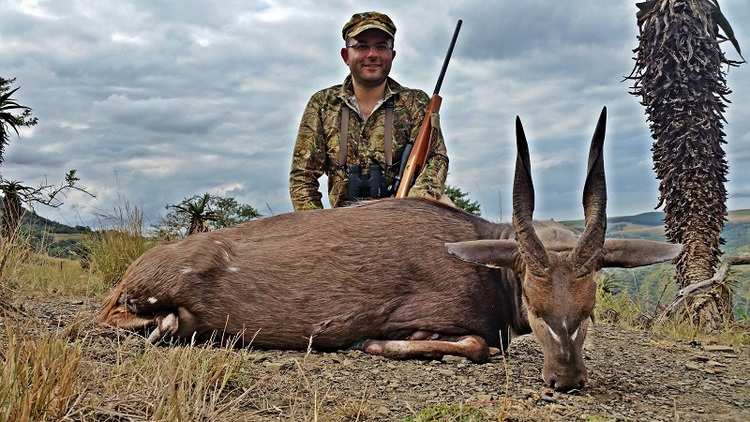 With two of the three spiral horns done will a Bushbuck hunt be on the cards on day 3?

The sun hadn’t come up yet and we were in the Lapa discussing our plan for the morning hunt over a coffee. I heard a bark across the small river in front of camp and Andrew turns and with a grin says “that’s your Bushbuck teasing you”. We were going to head over the mountain shadowing the camp and then walk the ridge road in search of Bushbuck. This medium size antelope is very elusive and as the name suggests spends most of their time in the bushes and feeding along the edge. They are solitary animals and is one of the few antelope that are aggressive – makes for an exciting hunt!

We walked and glassed the tapestry of clearings and bushes for the morning meeting a variety of game on the journey, I spent some time following a group of four giraffes through my binos, such an interesting animal to see in its natural environment with their head and neck above the tree line as they casually pick the odd leaf off a tree they pass.

Another antelope I was intrigued by was a Nyala cow, a bright orange coat with vanilla strips, makes you wonder how does this animal survive with such bright colouration against the colours of the African bush? With no Bushbuck seen, we were going to head back to camp for lunch.

Lunchtime and no Bushbuck yet or is there?

Shaun still remained optimistic on the drive back that a ram could have come out to feed and we continued to glass at each turn in the road. Then Shaun spots a Bushbuck feeding on the edge of a clearing almost at the top of the mountain. We stop the Cruiser a few hundred meters down the road and now it’s a ‘stalk race’ – run as quietly and stealthy up the hill to then stalk down onto the ram.

That was the plan, we did get on top of the ram but the tangle of bush and thorn vine was too thick so we reverted to a tactic the old timers used, throwing rocks into the thickets to flush the ram. Believe it or not, the ram ran out below us. In a slow-motion chain of events, I see the ram run past us and I think it is a young animal and turn to Shaun for advice who says “it’s a shooter!!”

In the same moment, I can see Shaun look at me and his face says it all, there is no time to set up the sticks in time for a shot. Instinctively I shoulder the Sako and follow the ram, for some strange reason the ram stops for an instant, enough time for a Texas heart short and he skips into another tangle of thorns and bushes.

We approach the thicket with caution as these Bushbucks are renown for charging when wounded. There he was in the middle of the thicket waiting to attack anything that dares enter his domain. He was definitely a fighter, a further shot from the .338 win mag and a close up shot from Shaun’s 9 mm and we could now enter the thicket to recover the ram.

What an animal, he was estimated to be well over ten years old with very thick horns and a well-worn hide to match. I was told that back in the day, the invite sought by many a hunter was a driven Bushbuck hunt in this area. I felt so privileged to have been able to experience the hunt and harvest an animal in its native environment.

A satisfactory lunch in so many ways

Lunch was being served back at camp when we arrived back and yes home baked bread was served again! Andrew could not believe that we managed to take the Spiral grand slam of the area in such a short time, I do not think any of us could believe it.

The afternoon was spent preparing for a late dusk/night hunt. I wanted to hunt the elusive and cunning Bush Pig. Some refer to this critter as the demon of the night coming through, making no noise, leaving only a trail of destruction to vanish into a tangle of vines and thorns no other dare venture into.

These Pigs travel in sounders consisting of a dominant boar, a sow or two and piglets. Most people have never seen one in the flesh and some even question their existence. The most effective hunting in South Africa method is by baiting and patiently sitting in a hide well after dark. The weapon of choice is a .308 fitted with night vision scope as using a spotlight will spook the pigs into the darkness. I was told this is the closest to a leopard hunt experience there is, that was enough to raise the heart rate and give me a case of the shakes.

Setting up for the elusive Bushpig hunt – a one-night affair

We set the hide up in the afternoon, we then returned around 4.45pm and walked in on the area where the bait had been set, we came across a Nyala bull and a young Warthog, both were too busy feeding and were not interested in us. We settled in position and the blue sky was gradually turning all shades of grey until it blackened.

There was a stream flowing behind us and occasionally it sounded as though something was crossing it but who knows what it was. It felt as though time was slowly grinding to a halt but the temperature kept dropping. Shaun turned on his night vision monocle on, it was about 7 pm, he said: “they’re coming to feed, no they have spooked and run off”. These pigs come without making a sound, all we heard was the crisp snap of a dry twig.

Patience is required for a Bushpig hunt

Twenty minutes had passed, this time the pigs were on the bait, the rifle had somehow gained weight over the course of the wait and my joints felt like they were seizing up. I started to panic, what if I miss, what if I can’t hold the rifle steady. Shaun whispered, “the boar is under the feeder, turn the scope on and see if you can see him”. I power up the scope and all I can see are three sets of large round eyes, I can’t see the animal! I slide the rifle forward and now I can see the pigs, there’s one hanging back and two under the bait, the boar is pushing the other pig off the feed, he comes on broadside and he is rooting around in the feed, I squeeze the trigger and he jumps back from the sting of the 308 and runs in the opposite direction to the other pigs.

Silence reclaims the valley we are in, I’m holding back the excitement until we can find the boar. Like the Bushbuck the Bushpig have a really bad temper and to potentially have a wounded boar in the dark is not an ideal situation.

We turn our headlamps on and walk over to the bait to find a blood trail or any sign, nothing, no blood, no trail. I knew the shot was good, but with the reputation the boar has if he has gone high into the bush what chance would we have.

We walked the edge of the thick bush and spooked a pig who ran straight up the hill, we continued along the edge the same thing happened, this time Shaun ran in after with his 9 mm at the ready, I was not full of bravado and at this point I would prefer to have a shotgun or at least a knife on my belt before I venture into the tangle of bush. We decided to head back to camp and come back at first light to find the boar.

The search for the Bushpig continues

Ace and William were with us along with Colt a young and a little rotund beagle and Gus the Jack Russell, of course, full of gusto and excitement. We begin the search from the feeder and move into the bush, as we walk in the dogs are moving through the vines eagerly, scenting the air and zig-zagging their way up.

One bark from Colt and we look across and there is small boulder piled up in the vines, it’s a Bush Pig!! Woohooooo!! Even though he omitted a pungent vile odour which made me dry reach and made the others laugh, I was over the moon. He was a prehistoric looking creature, ugly and hideous to some (my wife) absolutely awesome and interesting to me, the noble thief of the night, what an animal lay in front of us!

On to Impala and Warthog

After a lengthy photo session including Ace and William taking some snaps, we dropped the boar off at the skinning shed. The heat had not come through the clouds so we decided to try for an Impala ram. I wanted to hunt both an Impala and a Warthog to finish off the hunt.

Both Andrew and Shaun mentioned at the start of the hunt that we were not in an area which produces large Warthog boars even though we saw a few warthogs rooting round on separate days, no boars were in sight worth taking. That left Impala, I made the fatal error of underestimating our quarry. I thought it would be an easy hunt, select the largest ram from a herd, wait for a clear shot and hunt is over, how wrong I was.

Impala are very much like our Chital up in Queensland, they hang out in large herds in semi-open country and are very skittish. We spotted a herd in long grass and there was a large ram worth stalking on. We tried to get the upper hand on the herd to cut them off through some thick bush but it was not to be. They knew something was up and were gracefully picking their way through bush maintaining just enough distance to be consumed by the green, yellow and brown mass.

We drove around the back of the hill and lady luck had run out, no impala to be seen. As we pulled into camp Shaun turned to me and said “the end”.

I could not believe after all the planning, preparing and excitement I had hunted in South Africa and been lucky enough to experience the hunt with some awesome people and take some fabulous animals. Now the challenge remains exporting the animals back to Australia.

I spent the remainder of the trip with Lauren and Oscar exploring South Africa, what a place!

Between the game reserves, natural wonders and superb cuisine not to forget the friendly people, If you have the opportunity, get across there and check the place out.