This is Africa – Absolutely Lekker – Day 2 The Hunt Begins 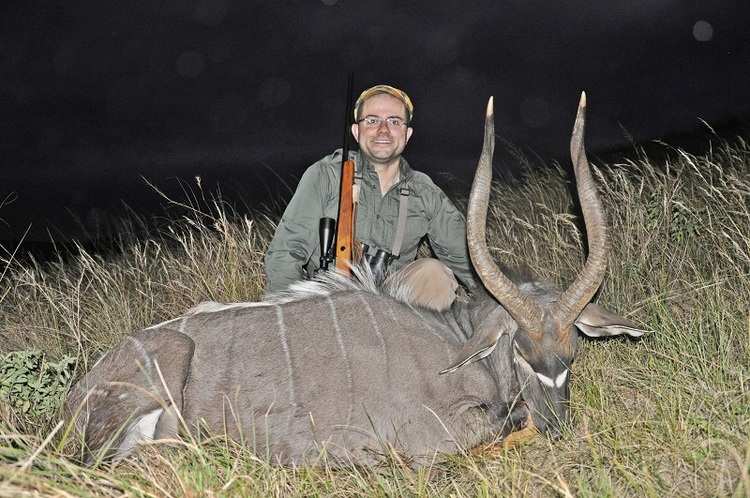 There’s no better way to wake a camp of hunters with the deep crack of a 338 win mag being sighted in at 6.30 am. A couple of shots and a couple of clicks and we were ready to rock n’ roll. We were also accompanied by Ace and William our tracker and respective skinner for the hunt.

The Cruiser ambled up the mountain as we were going to hunt a property down the road. We pulled up to the boundary gate I noticed the grass was higher than the fence; this was going to be an added challenge just trying to see over the grass. We start glassing the hill face from the vehicle which has acacia trees and brush covering it in patches.

I get excited and elbow Shaun when I spot the rusty red coloured Impala ewes feeding out in the open, I was wrapped but we were after a Kudu Bull, the majestic King of these hills. With the sun starting to warm up we used the cover of the trees and skin up halfway up a hillside and glass the facing hill.

We spot a Nyala bull however he is partially hidden by the brush and there’s no point in putting in stalk as we spot two Kudu cows with a calf in tow. We follow the cows across the hill waiting for a bull to appear, another cow is spotted on the ridgeline and again we comb the brush waiting to see a bull but it was not meant to be.

The Impala herd had now moved towards us, it was tempting to look for a monster ram, instead, we headed back to the vehicle and crossed a dirt track into a neighbouring property.

The morning was now turning into afternoon, there was no movement on either side of the vehicle as we travelled down the farm track and exited the property. We head back to camp where the air was soaked with the scent of freshly baked bread over coals and a hot lunch awaited.

Shaun plans the afternoon hunt as time is ticking and he wants to get onto a Kudu, again we head out in the same direction to check a property on the opposite side of the main road. The grass isn’t as thick on this block as cattle have been pushed through, there’s an abandoned farmhouse which has seen better days.

We are following the cattle fence into what appears to be a 180-degree enormous valley, with several gullies choked with brush and lightly timbered. We crawl out of the Cruiser and take up some glassing positions, three sets of binos are canvassing the vast expanse of greens, yellows and greys. It felt like I was glassing for Sambar back home, searching for the ivory tip or glimpse of movement on the edge of a clearing.

Is it a Kudu bull at last?

I head off to the right side of the valley and I hiss to Shaun to come and look, Kudu cows. I haven’t even finished my sentence and he has Ace sitting at the look-out point, there’s a Kudu Bull. We turn the Cruiser around and tear down the shoulder of the hill to close the gap enough to put in a stalk, every bovine on the property must have been standing in our way on the track staring blankly at us and taking all the time to amble off the track.

Jumping out of the Cruiser we are quickly, yet carefully moving through the brush and thorns. Thorns are everywhere in this part of South Africa and they tear through everything. We are crouching behind a bush, and the bull is right in front of us, Shaun sets up the sticks and I get in position.

“He is right in front” whispers Shaun, all I can see is what I think is a part of a horn and nothing else. I think to myself where are the jungle drums coming from at this point? No drums, that was my heart pounding in my ears. I had to calm myself down and I still couldn’t see any Kudu.

We inch forward on hands and knees trying to avoid dried out, brittle inch long thorns positioned to pierce flesh. Off to the side, Shaun spots another Kudu bull, while the first bull is now servicing a cow. To give you an idea how thick the bush becomes I could not see any of this occur from 80 or so meters away.

The sticks are set on the second bull and I can see him now on the move. I spot him in the scope and chase him through an opening and not comfortable with the shot I swing ahead of him to another clear as he begins to speed up I squeeze the trigger and he continues to run.

I was confident with the shot and Shaun is beaming with a smile, let’s go and find him. Within 30 meters of where the bull was running, we can see the Majestic King. What a spectacular animal, he was an old bull past his prime and exceptionally wide.

There were so many cattle ticks crawling all over the bull they almost lifted the bull and walked away with him. We were all ecstatic, it was around 4 pm and Shaun turns to me and says let’s keep hunting, hell yea!

Day 2 starts drawing to a close on a Nyala bull

The light is fading and we have crossed two valleys before we start glassing again. Within minutes we spot three brown blotches on the hillside, a bachelor herd of Nyala bulls. I grab the rifle and we are racing on foot down a hill to get within shooting range.

To our surprise, an old Nyala bull is standing under a tree below us. He starts to trot up the hill to the cover of the choked bush, I fire and the shot is just in front of him. Standing on my toes I take a second shot and it is a solid hit to the Bull. We look at each other and can’t believe in an afternoon we have managed to hunt the King of the hills a Kudu bull and the Joker of the hills a Nyala Bull.

The recovery of the bull was an adventure in itself, using a body bag, the torch on my phone to negotiate the long grass and hidden boulders and finally the winch on the Cruiser to haul the bull out of a dry creek bed. Two of the three spiral horn antelope of the area are in the bag at the end of one day.