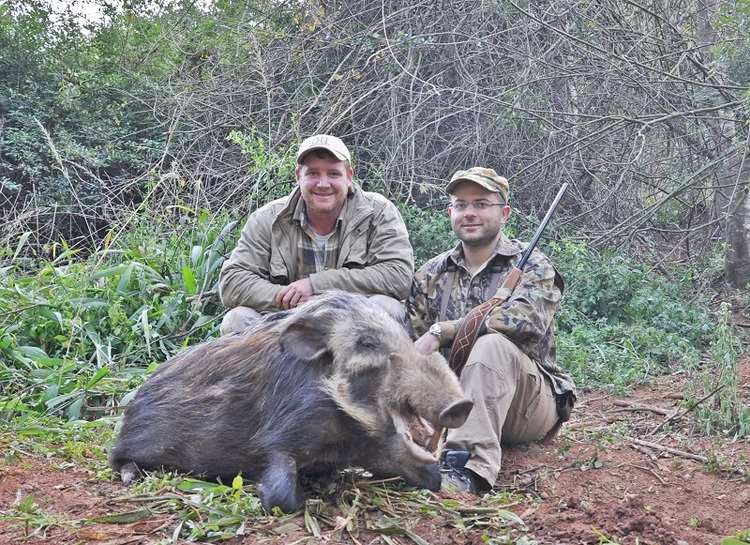 This is Africa as experienced by Vincenzo Lombardi

It is a day after our South African adventure has come to a close, I have unpacked our bags with the house is still quiet with the jet lag lingering, and start downloading photos from the memory card. Flicking through the countless photos, I delete the not so postcard moments and sort the other photos into folders. I come to the safari photos and still can’t believe I have been lucky enough to hunt in Africa!!

Where it all began

If we rewind twelve months my wife Lauren and I were planning our wedding and tossing up a suitable destination for our honeymoon. The decision made challenging given our one-year-old little boy, Oscar, who would be travelling with us.

Our thoughts were jumping from one continent to the next, first, it was Japan, then North America. Then the suggestion was made by Lauren what about South Africa and visiting the extended family, how could I say no?! I looked up on a map whereabouts the family was based and it just so happens they were close to some prime hunting areas. With Lauren’s support, I decided to squeeze in a small four-day hunt. At this point, I barely knew any African game species.

How to find true free-range hunting, no high fences

Not knowing where to start and not having any contacts my research began with internet searches and sending through countless enquires to outfitters. I read many blogs and began researching the game species. My criteria for the safari was simple.

Easy enough one would think. I spoke to numerous outfitters in the small hours of the night many of which told me that everything is high fenced and free-roaming does not exist in South Africa. Some outfitters even went to the extent of saying over the phone, ‘you shoot what you see’. At this point things were not looking good, the high fenced scenario really didn’t appeal and being told that what is seen is shot dampened my spirits. I was on a budget and tight hunting time and not in a position to openly write cheques for anything that moved.

Deception? Do your own research!

In one of my searches, I used the word ‘free range hunting South Africa’ and Crusader Safaris appeared. The website looked legitimate and was up-to-date, the game species listed were of interest. I sent through an enquiry to which I later found out Andrew thought I was an anti-hunter, scamming for information and he almost did not reply. After some conversations and some research into Crusader, I decided this was the outfitter for me. Andrew Pringle has operated Crusader Safaris for over ten years and one of the primary ethos’s of his operation is promoting the full free range hunting – no high fences.

Travel planning with a firearm

Now came the hard part in amongst organising a wedding, hosting family from overseas and preparing for our son’s first birthday, was all the administration to bring the firearm across to South Africa (SA). I thought I had all my paperwork in order only to arrive at Perth airport and discover there was a customs form that was missed. Lauren remained as calm as she could with the time very quickly disappearing for us to catch our flight to Johannesburg. However, with some very helpful customs officials who I can’t thank enough, we and the rifle were on board.

Finally arriving in Durban, I found the sun was strong as we drove back to a cousin’s house in Hilton where we would be staying. As we wind our way through the endless cane fields and eucalypt timber plantation (yes eucalypts are also native to SA) we pass countless trucks and buckies (utes) and to my surprise, there is the odd group of workers hanging on for life as the vehicle putts along at 130km!! And all I am told is TIA – This Is Africa. I think to myself, I’m actually here after reading numerous articles and watching countless documentaries.

Prior to going on my safari, we had booked a small getaway in the Drakensberg area. We were going to do some sight-seeing and stay on a private game ranch for some quality family time and also hopefully see some game so I don’t get the shakes if the first animal I see in SA is through the scope. The Drakensberg is a spectacular mountain range and its name translates to ‘Mountains of Dragons’. The landscape gently rolls from semi-open pastoral hills, and then dramatically rises into shear chiselled peaks gracing the heavens. Grandfather pines and overgrown jungle vines dot the hillsides, with groups of Vervet Monkeys and the occasional Baboon peering through for an opportunistic meal or souvenir they can collect from unsuspecting tourists.

The game farm we stayed on had an extensive list of antelope which called the place home. We bounced over the boulders (yes boulders, not rocks) littered track excitedly pointing at any slight resemblance of an animal only to find it was either an old aloe or an artistically burnt out stump. We did manage to spot a herd of Blue Wildebeest, Zebra, Impala and through binoculars, we saw a magnificent Kudu bull and a small herd of waterbuck, and my nerves settled.

Finally, Friday had come and a dual cab Landcruiser rolled into the driveway. Andrew unfolds himself out of the car, standing almost as tall as the Cruiser. We saddled up for a short 50-minute drive south to the hunting camp. As we got close to the hunting area on a hillside off the road a lone Nyala bull was feeding. Andrew looked up and said he had a camp full of Yanks who wanted Nyala and not one had been seen for the past week!

We pulled up at a rusted farm gate separating the road from a small goat trodden track hugged by a tangle of vines, thorns and brush. As we meandered down the track we saw Zebra feeding off into a small clearing not phased at all by the vehicle. Around a sharp corner and the valley opened up into a flat which had been recently planted with pecan trees, a river ran at the base with a sheer mountain face climbing the opposite side. The road continued through to a treed section where the game prep area was and then onto the camp. What a place! Surrounded by steep mountains and sub-tropical forests, the best way to equate the area is to take the high country mountains of Victoria and litter them with the forests of north Queensland.

Sunset on day 1 of my safari

As the sun slipped behind the hill the PH’s arrived back in camp with the American clients, their day had been quiet only a Zebra taken between five hunters. The PH’s were around the fire turning cigarettes into ashes in record time comparing stories of frustration with game not showing up. I met Shaun Higgs who was to be my PH for the duration of my stay. He was a keen hunter who had grown up in the area and learnt to hunt in the hills there, an all-round ‘good oak’ (good bloke) and we were both keen to get out and climb the hills in search of bulls, rams and boars!

I endured a dinner with the Yanks and listened to stories of hunts which are no longer accessible and before long it was bedtime. My first night will never be forgotten; lights were out and the air was still with the temperature dropping. About two hours into my slumber, I was awoken by rustling on the canvas wall, and all I could think was blasted Vervet Monkeys are going to steal my gear and I will have to fish it out of the trees in the morning. I told them to move along but 30 minutes later and again the rustling could be heard. I thought I would go to the bathroom and check out what was going on. Camp lights were on but there was no movement, except the last wisps of smoke from the fire, as I retreat to the chalet I find the culprit, Gus the Jack Russell who was looking for a warm place to stay. He shared my bed for the night.