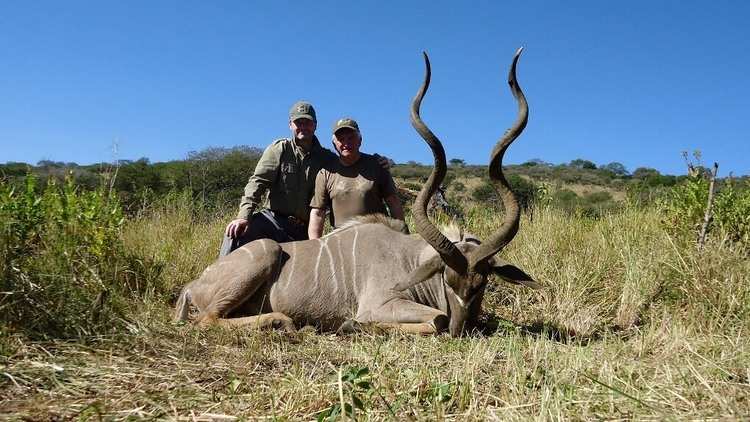 Leaving at first light, we drove slowly into the mountains. At the top I turned off the vehicle. There Alan, Jimmy and I quietly sneaked to the edge of a precipice and scanned the thick bush below with our binoculars for any interesting species that may offer us an opportunity. The Sun was at our backs making it easy to see into the thickets below. A large troop of Baboons barked at us from nearby as they made their way to the bottom.

Hunting Kudu in the Baviaansriver

As we sat in the warm morning sunshine, Jimmy whispered that he had seen something moving in the thick bush which looked like the back end of a Kudu bull. We sat still for a while and then suddenly it appeared from the deep shade and stopped in the open to warm in the Sun. The Kudu’s massive horns shone in the early morning sunlight.

Alan had already made up his mind. Placing his rucksack on the rocky edge of the cliff he got comfortable. It was a long shot and downhill to boot. Taking his time, he breathed deep and squeezed the trigger. It seemed a long time before the loud thud echoed back to us.

The Bull jumped high into the air and disappeared into the thick riverine bush. We waited a full ten minutes and seeing no movement below sent Jimmy down to investigate while Alan and I remained on top, which would give us an aerial advantage. Once down, I directed Jimmy to the spot where the bull was last seen. He entered the thicket and within a minute came out waving his arms wildly in the air. The old Bull was down.

It took some time to descend owing to the rugged terrain, but finally, we arrived at the bottom. He was an impressive specimen of a Cape Kudu. His colour, a dark brown compared to the Southern Greater. His neck was almost black and covered in scars from fighting other bulls for dominance. His horns too were magnificent, with a deep spiral, measuring just over 50 inches. The terrain made it challenging to approach near with a vehicle, making it necessary to skin him there and pack it out piece by piece, to a point almost a kilometre away, where it could be loaded and transported back to the skinning shed.

Species indigenous to the Baviaansriver

With still a few days of African hunting safari time left, Alan indicated that he had developed an interest in hunting a Vaal Rhebuck, as they were uncommon to the rest of the African continent and since the Baviaansriver abounded in the species, this would be a fantastic opportunity to take one.

We had seen a large ram high in the mountains the day before, so early the next morning we ascended one of the tallest mountains in the conservancy and sat scanning the sunny slopes around us. There was a gentle breeze which would certainly not be a problem, should a long shot be offered.

Not spotting any from the first position, we walked along the top of the mountain scanning the deep valley below us until we spotted a small herd of Vaal Rhebuck standing way off, alert and staring in our direction.

As per usual there was only one ram in the herd and taking a closer look through a spotting scope, we were able to ascertain it was indeed the ram from a few days ago. It was too far to shoot from that position, so we retreated over the back of the mountain and disappeared from their view.

Keeping below the horizon we crept to a pile of rocks that would put us at about 300 meters from them if they had remained in the same place. Slowly I raised my head to look and fortunately they were still in the same position as we had first seen them.

We had successfully outsmarted them as they still faced toward the place where they had first seen us. Alan raised his rifle in slow motion to avoid detection and gently rested it on a flat rock. Once he was comfortable, he took careful aim. The loud crack echoed in the mountains. The ram began rolling down the steep slope, finally coming to rest on a flat patch of grass. After watching for a minute or two to make sure he was dead, we approached him.

I immediately saw that it was bigger than it had appeared from a distance. Taking turns to carry the ram, we eventually arrived, exhausted at the vehicle.

Time for some sightseeing

Alan’s hunting safari had all but come to an end but would not be complete without the afternoon spent visiting all the historical sites that littered the Valley. From old settler monuments and building’s to bushman paintings high in hidden caves we spent our last afternoon together.

The next day I dropped Alan at the airport, and we said our farewells. I knew it would not be long before he returned to experience another African adventure.