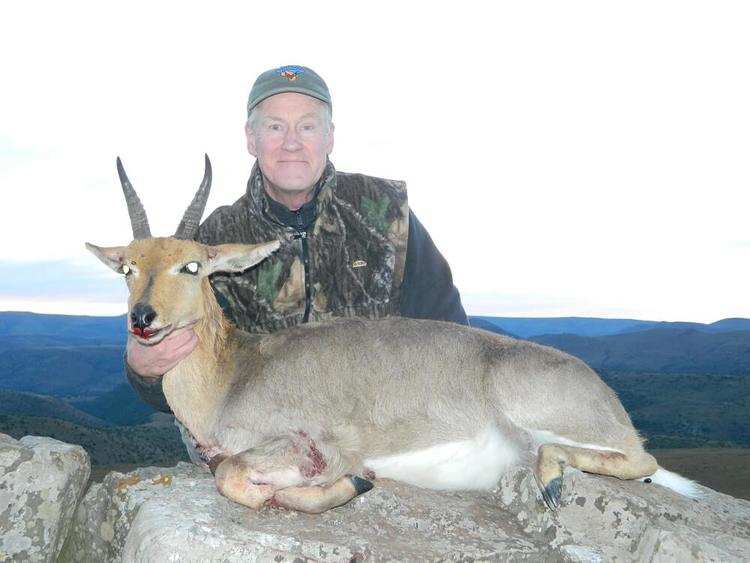 The following morning, well before sunrise, we left behind us the Umkomaas Valley.

Six hours later, we arrived in the Baviaansriver Valley. This too, like the Umkomaas was also a conservancy and was the natural habitat for such animals as Black Wildebeest, Cape Kudu, Blesbuck, Mountain Reedbuck and the wily Vaal Rhebuck to name just a few.

Black Wildebeest back in the Baviaansriver Conservancy

Black Wildebeest had at one time, been endangered, the entire species reduced to almost total extinction. Through careful management, their numbers have increased significantly to where they could now be hunted, although requiring a TOPS permit. They now roam the open areas on the high ground in large herds.

The Vaal Rhebuck too were just a few decades ago, persecuted for competing with the livestock for grazing and were shot by their hundreds along with the Mountain Reedbuck who preferred the high grassy slopes.

The increase in foreign hunters who were prepared to pay much higher prices than the local meat hunters, soon put a stop to the desecration of these indigenous species.

The Crusader Safaris Baviaansriver Lodge commands a beautiful scenic position, high on a rocky ridge overlooking the Baviaansriver. After settling in and a quick lunch, we were soon out hunting again. Starting near the camp we worked our way up to the higher ground, encountering a myriad of different species indigenous to the Winterburg Mountain Range.

Cape Kudu were plentiful around these parts, and I could see Alan talking himself into a Bull to compliment his two Southern Greater trophies. As we climbed above the treeline, we started seeing groups of Vaal Rhebuck. These medium-sized woolly skinned creatures were most sort after by hunters who had already collected most African species. And the southern region of hunting in South Africa was the only place in Africa that they existed.

The Baviaans was settled in 1820 by Scottish settlers, and most of the landowners here were direct descendants of these original pioneers to this area. This conservancy operated in much the same way as the Umkomaas Conservancy.

The Baviaansriver conservancy is made up of several farms where Crusader Safaris hunts and manages the wildlife population making it viable for the landowners, thus providing enough incentive not to overhunt and destroy the wildlife, allowing them to co-exist with the livestock.

We arrived back at the lodge just as dark fell and we settled in by the roaring fire. We planned that the next day we would travel to the other side of the conservancy in search of some different species, like Cape Eland and Warthog that were prolific on that side.