Day 2 – Nyala and Kudu Hunting in the Umkomaas Valley 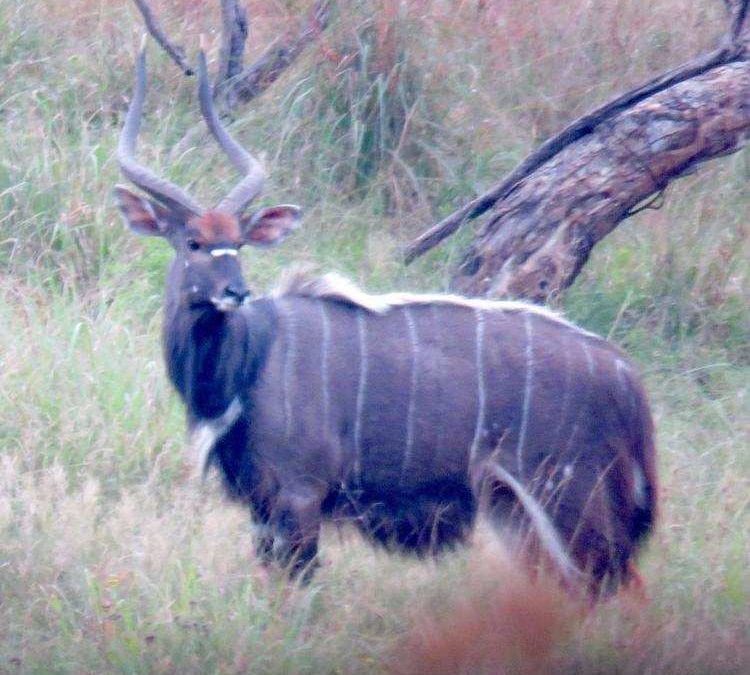 The next morning, we were up early and travelling to another part of the conservancy in search of a big Nyala Bull.

Stumbling upon a large Kudu Bull

We were driving slowly down the beaten two-track when our tracker Jimmy tapped on the roof and pointed across a wide-open valley. Standing on the top of a ridge with the rising Sun in the background stood a huge Kudu Bull. He would definitely be in the sixty-inch class. Alan had shot two before and so was not in the market for another Southern Greater Kudu. The quality in this area was outstanding due mainly to the strict quota system in place.

We continued driving a little further and stopped when we reached a small river. Here we parked the vehicle and began following the acacia lined watercourse. The Sun was rising behind us, making it much easier to pick up any game that may be out in the open. We were quietly walking down a game trail running parallel to the river when Jimmy stopped dead in his tracks. He motioned to us to get down behind some grass. I raised my head and searched the area ahead of us. About 80 meters ahead, partially hidden by some tall aloes were two Nyala Bulls.

Their white manes along their spines were raised as they circled each other in typical fashion. They were completely oblivious to us. I would need to have a frontal view to be able to judge whether there was a suitable bull to take. We waited for a few minutes until they both faced us. The one the left was average, but I could not see the other clearly through the thick brush that lay between us.

Waiting for the right moment is key

At last he stepped forward, and I immediately knew he was the one we wanted. Not only was he long but the tips of his horns flared out making his ivory tips more conspicuous. Waiting for the right moment I rose slowly and placed the shooting sticks. I then gestured to Alan to shoot. The sharp crack shattered the morning silence. The Nyala jumped and immediately slipped into the thick thorn scrub. We waited a few minutes and then slowly walked over to the spot the Nyala had been standing.

Immediately I saw the crimson blood on the dry grass. A trail of small red dots led to a tiny opening in a thorny thicket. Jimmy entered the gap in the thicket on his hands and knees and disappeared.

We waited in suspense and then an excited whistle was heard from deep within the thick brush. He had found the Nyala, and it was down. Alan heaved a big sigh of relief as I extended my hand to congratulate him. He had achieved something high on his bucket list and had done it in style, by walk and stalk, it was precisely the type of fair-chase hunt he had dreamed of, long before he had even planned his hunt in Africa.

The bull measured just on thirty inches and Alan on seeing it immediately asked that we should skin it out for a full mount. After the usual photo session, we loaded the Nyala and drove back to camp so the skinners could begin the field preparation. With still many hunting days left, I conferred with Alan about the possibility of travelling to another of Crusader Safaris free-range areas to the South, as we had several species there that were endemic only to that part of hunting South Africa.

After a little thought from Alan and some persuasion from myself, Alan agreed that while he was here, he may as well see another part of the country, hunt some new indigenous species as well as enjoy the history and culture which was unique to the Cape. So, we made plans to leave early the next morning.

First a little community work – it’s all about giving back

That afternoon I took Alan to visit the local community school. We took with us the meat of the animals we had hunted to give to the children as part of the community initiative Crusader Safaris had started in the area.

After the children had sung a few songs of thanks, we ambled back to camp to prepare our luggage for the next day’s journey south.