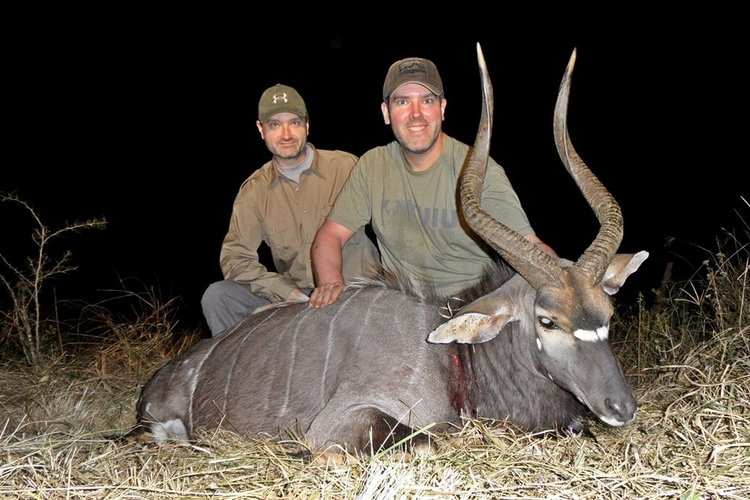 It was Alan’s first trip to South Africa, having previously hunted in Zambia a few years before. We chatted excitedly as we drove from the airport to our camp in the legendary Umkomaas Valley, which is home to Crusader Safaris. Alan explained the reasons that had led him to book a Nyala hunt in this particular area.

We only do true free range hunting

He had stipulated that he would only hunt free range hunting areas. This was a tall order in South Africa as most hunting takes place in high-fenced Reserves. The Umkomaas ticked the free-range box perfectly. The Umkomaas Conservancy was made up of several working ranches which collectively fell into one large conservancy. Most of the farmers of those ranches had abandoned cattle farming to a large degree. The game had subsequently thrived, testament that the conservancy policy worked perfectly in conjunction with Crusader Safaris relationship with the locals in the neighbouring communal land, whom had seen how the sustainable use of wild life could impact their lives directly for the good, in the form of protein and financial assistance towards schools etc.

Native Nyala and Kudu in the Umkomaas Conservancy

After a while we turned off into conservancy and trundled down the road toward the traditional tented hunting camp. On the way down the steep hill we passed several groups of Nyala, some Kudu and a few other species, which excited Alan even more. Alan had done his research and had learnt that the average size of Nyala here was excellent with some of thirty plus inches taken every year.

We finally arrived at camp and Alan quickly unpacked his hunting gear. After a few shots at the range we went straight out hunting. The scenery here was completely different to what Alan had expected. “Unbelievable “he whispered to himself as he stood on the high ground and gazed across the dramatic topography that seemed endless. Having hunted here often I had a good idea of what game lurked in those lush valleys. Not only Nyala but numerous Cape Bushbuck, Southern Greater Kudu and several other species. Due to the Conservancies good predator control, jackal and Caracal numbers were kept in check. Smaller wildlife such as Blue Duiker and game birds like Francolin and Guinea Fowl, were now being spotted, having been absent for the last decade or so.

We spent most of the afternoon stopping and glassing the open areas between the thick indigenous forest. We spotted at least six shootable Nyala Bulls, but as we had time we would hold off for something really big. The Sun was now almost below the horizon, perfect time to hunt the elusive members of the tragalaphus or spiralled horned family. This area boasted three of the most sort after of the group namely Kudu, Bushbuck and of coarse the flagship species, the Nyala. Collectively known as the tragalaphus trio, this group of highly sort after species were hunted by many a discerning sportsman in quest of our local grand slam.

We stopped on some high ground and started to scan the short green grass below when suddenly I noticed that a large Cape Bushbuck had appeared on the grassy slope about a hundred meters away. “That’s a great Bushbuck Alan, why don’t you take him” I said in an urgent voice. “I all ready got one from Zambia” was his answer. I took a few minutes to explain that the Cape Bushbuck was completely different from a horn and colouration perspective. His horns were much thicker and his colour was a dark chocolate brown with distinctive white dots, compared to his cousins up North who were largely red in colour with more slender horns. He didn’t need much convincing and I quickly set up the shooting sticks. Alan made the perfect shot. He had taken a magnificent specimen which was certainly one of the most elusive animals around.

That night we sat around the fire, sipping on a cold Beer and chatting. He asked me why he had not seen any exotic species here so far. It was a common question and one I had answered several times before. My answer was a simple one. Who would invest large amounts of money importing exotic species when there were no high fences to keep them in. He nodded his head in agreement.