Comparing Free Range Kudu Hunting in the Umko to the Baviaans 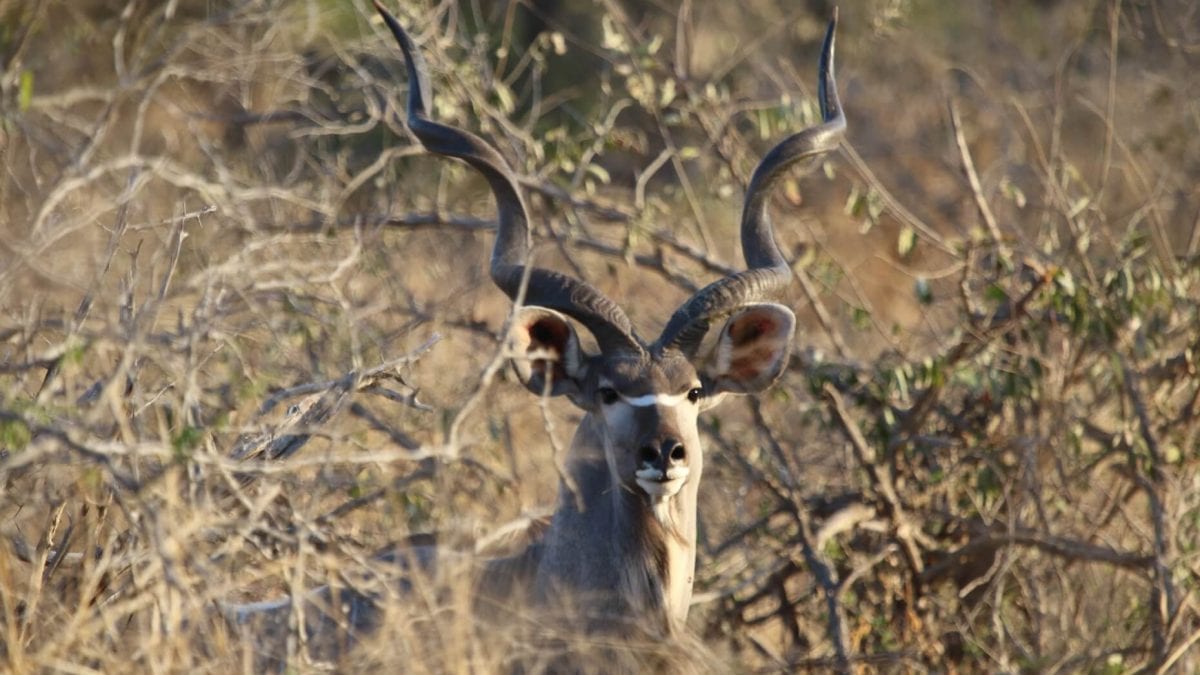 There are some great similarities and stark contrasts to free range Kudu hunting in the Umkomaas Valley of Kwazulu Natal when compared to the Baviaansriver in the Eastern Cape region of South Africa.

Hunting free range Kudu in the Umkomaas Valley of Kwa Zulu Natal in South Africa offers arguably one of the most exciting and challenging free range hunts one will experience in South Africa. Unlike its cousin, a few hours south by vehicle, The Southern Greater Kudu (Tragelaphus strepsiceros), has a much more diverse diet owing to the higher rainfall than the more drought-prone Eastern Cape. This phenomenon almost certainly accounts for the slightly smaller mass of the Cape Kudu.

Averaging around 280 kilograms in weight and standing around 160  centimetres at the shoulder, the Southern Greater Kudu is the master of camouflage. Early season, (March/April) the foliage is much denser,  providing extra cover for the cunning bulls. From July onwards the leaves drop, thus presenting more opportunities of spotting these elusive animals.

Like many of the Tragelaphus family, Kudu tend to browse on the edges of small clearings, especially at first and last light, slipping into the dense surrounding vegetation as the day warms up or they detect a presence of danger.

Free-ranging Kudu are not confined to any particular boundaries and may travel several kilometres within a home range depending on the time of year. This makes the hunting of this species more exciting as new Bulls are always coming into the mix.

Although the rutting season in the Umkomaas area can vary slightly, June seems the most common time. With the rutt comes an increased chance of finding that monster Bull as they are less likely to flee when accompanied by a group of Kudu Cows.

Although trophy bulls of 60 inches plus are taken regularly, the average is around 55 inches.

A typical day would involve a pre-dawn start, and the hunter would make his way to a likely valley or range of hills, climbing up on to the high ground and spending time glassing the valleys and hillsides, hoping to catch sight of a  good trophy. The early morning sun makes the spotting of game easier than midday when the sun is overhead. Patience is essential, and a few extra minutes at the lookout can be the difference between seeing nothing and spotting a bull stepping out from behind a thicket. The next challenge arises when a trophy  Bull has been spotted a long ways off. By marking the spot with a physical feature like a dead tree or a large rock certainly makes it easier when you finally get to within a  suitable distance and position from where to shoot.

Often by the time you arrive at the place you last saw the bull, he has disappeared.  More patience is now required to sit quietly and scan the sounding area, as he may have temporarily stepped behind some foliage to feed or lay up, especially around midday, sometimes only presenting a shooting opportunity later in the afternoon. Unless chased out of a particular area, a bull will often remain for a few days close to where he was last seen thus offering another chance to find him.

A few hours drive South from the Umkomaas area takes you to the Baviaans conservancy.  This rugged mountainous area, set in the Winterberg mountain range, is home to a good population of free range  Cape Kudu.  This cousin of the Southern Greater Kudu is slightly smaller and sports a much darker coat.

A good trophy will measure around 45 to 50 inches. Only in recent times has the Cape Kudu been accepted in its own category by Safari Club International. The dark brown coat is thought to have evolved over centuries of living in the semi-arid regions of the Eastern Cape. Many Bushmen paintings depict profiles of the species that was a sure food source for these nomadic people.

Some fenced game ranches have introduced Southern Greater Kudu to bolster their genetic pool to produce larger trophies. This practice has been viewed in a bad light by many of the free range hunting connoisseurs.  The true Cape Kudu still exist in the unfenced rugged mountains of the Eastern Cape, providing an exciting hunt to those that pursue it. Cape Kudu are particularly wiley and I have adapted to standing dead still in thickets as the danger passes at mere meters. Acacia Karroo forms a major part of their diet, as does Spekboom and Aloes.

The challenge of the Cape Kudu hunt

The Cape Kudu in mountainous terrain tends to descend from the high ground to the more thickly wooded valleys in the evening, ascending the high ground at first light from where they can observe any danger approaching. The ability to accurately shoot 300 to 400 meters is an added advantage when hunting Cape Kudu as the open vegetation makes stalking difficult.

Choice of calibre is important, and a flat shooting cartridge like a 300 Winchester magnum or a 7mm Remington magnum are the favourites.

A typical day would involve leaving camp at first light and traversing the road network, glassing up frequently at the Sunny mountain slopes hoping to catch a glimpse of a big bull sunning himself after a crisp winter’s evening. Alternatively walking the tops of ridges looking down into wooded valleys often produces opportunities of a shot.

Recovery of a big bull is not for the fainthearted although stretchers have been adapted to help carry the trophy up or down when a vehicle cannot get close.

Kudu meat makes fine table fare and can be used in a multitude of recipes. Free range Cape Kudu and Southern Greater Kudu hunting never gets old, no matter how many times you’ve done it. The lure of sitting quietly in the witching hour, watching over a valley or mountain slope is a strong magnet for any hunter who enjoys a true free range experience.

To enquire about or book a free range hunting experience and Kudu hunting, please email hunt@crusadersafaris.com or contact us here. You can also get hold of our price guide here.