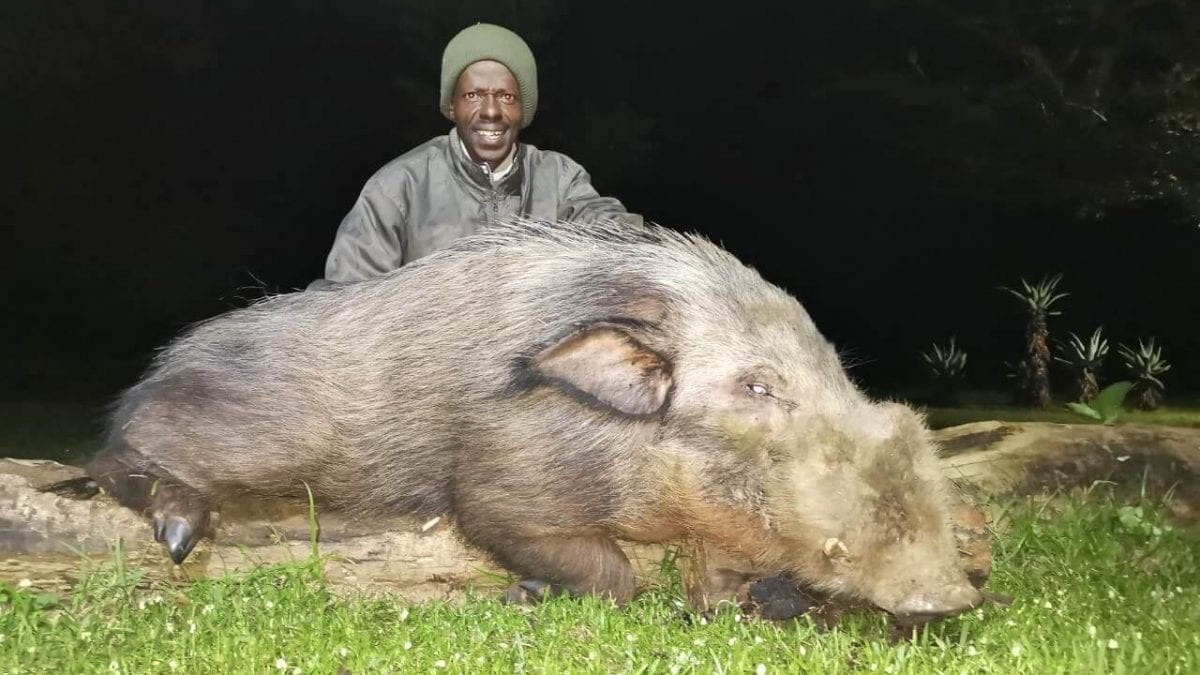 Bushpig hunting is not on everybody’s list as far as trophy hunting goes, but those of you who have not had the opportunity have undoubtedly missed out.

Bushpig: (Potomachoerus Larvatus) is a species of African game and is not a feral pig as is believed by many. They range from Somalia right down to the Southern tip of Africa and are one of the most interesting and exciting animals to hunt. They thrive in a variety of habitats ranging from coastal to Montane Forest. They regularly cause much damage to crops like Sugar Cane and Corn.

I had researched extensively as to which places I could hunt these elusive animals in their natural environment and which is also a free-range hunting area. My search led me to the KwaZulu Natal Province of South Africa and more specifically, the Umkomaas Valley. This conservancy had no high fences, and a dedicated anti-poaching team protects the indigenous species that thrive here. The area, made up of a group of former cattle ranches was now solely a wildlife haven.

I was picked up in Durban by my guide and companion for the next few days,  Shaun. He had hunted these animals for several years and had a wealth of experience in this field. We travelled Southwest for an hour and a half arriving late afternoon at our camp in the Umkomaas Valley. Crusader Safaris are based in the heart of this wildlife paradise. Their well-appointed old-style tented camp lay under some shady Stinkwood trees along the Nkobeni River, a tributary to the Umkomaas River, the source is in the famous Drakensberg Mountains, some 80 kilometres distant.

Due to work commitments, I could only afford to stay five days at most.  If we had enough time, I would also look to take Cape Bushbuck and Nyala which were abundant in this area.  My research had also shown me that it was not easy to find an area in South Africa where one could hunt Nyala in a Free Range area. The Umkomaas valley was the perfect place. Its thick indigenous vegetation was the ideal habitat for a multitude of species.

Around the campfire, Shaun explained how we would need to be meticulous in our setting up of baits and blinds as bushpigs are predominantly nocturnal animals with excellent hearing and very sharp eyesight. The natural food for Bushpig consists of roots, rhizomes, insect larvae and carrion.  For the past few weeks, Shaun had been dumping all the innards, skins and unwanted leftovers from the skinning shed in certain spots as the rotten smell would attract Bushpig from far and wide.

In the morning, I tested the 30.06 with a thermal imaging scope. It shot perfectly. The thermal image scope would save us turning on a spotlight which could easily send a wise old boar running, never to return. We loaded a 50 kg bag of corn and together with our tracker left camp.

Along the way we saw several good Nyala Bulls, I could have taken one in the first hour but would instead focus on my main quarry. At the first bait site, we stopped and had a look around. The rotten stomach contents had seen a lot of activity, so Shaun removed the trail camera from a nearby tree and inserted it into his small card reading device. As we scrolled through the images, we could see that a Sounder (the collective name for a family of pigs) had been there twice before, but the male was still young. We decided to abandon this bait, the absence of a large boar would prove to be wasting our time.

We travelled for about thirty minutes to the site of the next bait. This bait was situated at the base of a mountain in dense undergrowth. A small stream bubbled from the soil nearby and flowed into a muddy pool. The tracker pointed out a huge boar track in the mud and I could see the smelly rotten pile of carrion had been disturbed.  We sprinkled some corn around and set a new trail camera. Then without disturbing the surroundings further, we carried on. There were still two more bait sites to check, so we pressed on. The idea was to spread the baits out so there was little chance of the same bushpig feeding on different baits as this could dilute your chances when it came time to sit. The one bait was in a secluded valley, so we stopped the vehicle and walked the last 200 meters. Here Shaun had just used corn as bait. We approached quietly and could see that there had been a lot of activity here. After switching the memory cards, we left again. We would check it back in camp.

We arrived at the last bait site just before noon and could see there was no real action here, so we continued back to camp for lunch.  We analysed the pictures taken by the trail cams while we waited for our cook to prepare lunch.  There were the normal monkeys and birds in the morning, then in the early evening, a pair of porcupines had feasted at about 9 pm. A small group of bushpigs came in. It was a sow with three young. I began scrolling through the pictures as it appeared there was no boar. They all left at about 11 pm. Then out of nowhere at 11h30 pm, a huge boar arrived. He was definitely a shooter. His huge bulbous warts stood out clearly as he fed on the corn. His long mane stood up straight on his back. We now had potentially two boars to concentrate our efforts on, and it was only the first day.

As we did not want to over bait, Shaun and I took a short walk to the crystal clear Umkomaas River, where we spent the rest of the afternoon fly fishing for Yellowfish.

Was the hunt on?

The next morning after breakfast, we set out to check our baits. We would focus on the two that had the boars feeding.  When we arrived at the bait near the spring, there had been certain activity. Removing the card from the camera Shaun placed it in his card reader, and our suspicions were confirmed. A huge lone boar, undoubtedly the one that left its tracks near the spring, had fed for 2 hours. Even more importantly it had come into bait soon after dark, proving he had been at this bait for a few days at least and was now settled.

Without checking the other bait, we got to building a blind immediately. The other bait site would be back up (plan B) should something change at the current location. Paying attention to firstly the evening wind direction and secondly the route used by the boar to approach and leave the bait site,  we selected a spot at about 60 meters from the bait. Another important factor when selecting the blind position was that it could be accessed from a cleared path that would not pass close to the bait, leaving our scent.

We replenished the corn and reset the camera before leaving. We would return 1 hour before sunset.

After lunch, we took a siesta and headed back to the blind in the late afternoon. We parked the vehicle about 500 meters away and walked the rest of the way. Taking our seats, we set up the rifle on a sandbag and began the long wait. The shadows grew longer and longer until we could see no more. Not far off a Bushbuck barked and I could hear the Zebra calling on a distant plain. We waited in absolute silence without moving.

Then there was a noise near the bait site, and Shaun leaned across. “Only Porcupines” he whispered. The sound continued and then changed to a grunting noise followed by a crack. Shaun nudged me, “get ready,” he said. I slowly got into position and pulled the rifle to my shoulder and turned on the switch of the scope. It took a few seconds to warm up and then I could distinguish trees and rocks. Moving the rifle about I suddenly came upon a huge white mass.  His warts stuck out clearly, so there was no doubt it was a boar. He was feeding, relaxed with no idea we were there. Afraid the wind may change, I decided to shoot as soon as a shot presented itself. He turned and stopped feeding; it was now or never. The cross placed behind the shoulder,  I squeezed the trigger. The sound echoed in the cool night air. Spinning around the Bushpig grunted as he disappeared into the thick undergrowth. Then there was silence again.

After a few minutes, the vehicle arrived. Taking a bright flashlight, we went to the spot the boar had stood. A small splatter of blood on a leaf, followed by another then another. There he lay, not five meters from the bait. He was massive, weighing around 200 pounds. His tusks were thick and worn, and he was indeed an old boar.  He was the perfect trophy.

My research had proved fruitful and thanks to Shaun, Andrew and the Crusader Safaris team, I could now spend the last few days hunting Nyala and Cape Bushbuck at leisure. The Umkomaas Valley Conservancy is a 120,000-acre free range area in KwaZulu Natal, of which Crusader Safaris owns 25,000 acres and leases the remainder. They have exclusive hunting rights to this unique free range area. To find and be fortunate to hunt such a large free range area for species indigenous to this area out of their luxury tented camp was a dream come true.

To join us for some Bushpig hunting in the Umkomaas, please email hunt@crusadersafaris.com or contact us here.