Hunting Vaal Rhebuck in the High Country of the Eastern Cape 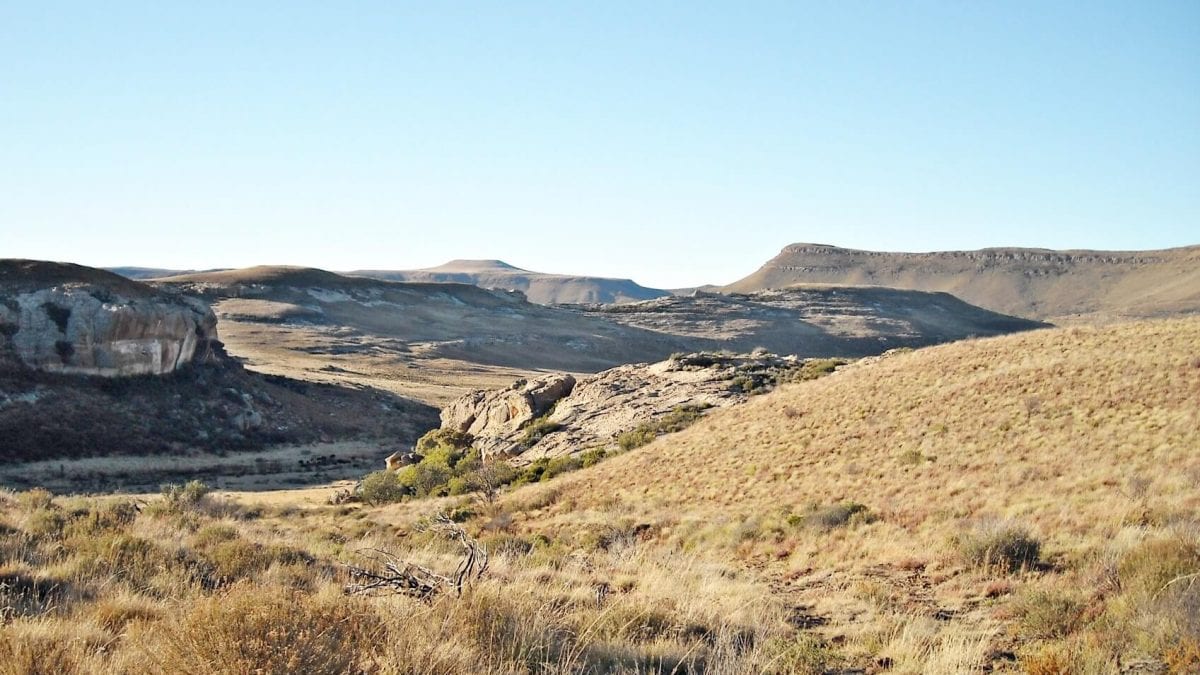 As an avid mountain hunter, I was drawn to the idea of hunting these elusive animals that live high in the mountains of the southernmost part of  South Africa. The Grey or Vaal Rhebuck, better known as the Vaal Rhebok in South Africa, is a small woolly antelope that has probably the keenest eyesight of any African species. Most times, it can be an extremely physical hunt and coupled with the fact that one usually needs to shoot more than 300 yards, I was up for the challenge.

They favour altitudes of around 1000 meters but can be found in a variety of habitat. After researching, I concluded that the highland country of the Winterberg Mountain Range in SA had arguably the highest density of these unique animals that one was likely to find. I wanted to hunt an area that was free range,  so I decided to go with Crusader Safaris who are based in the Baviaans River Conservancy about 2 ½ hours west of Port Elizabeth.

The Baviaans River conservancy is made up of several working ranches that span across hundreds of square miles of breathtakingly beautiful countryside. The landscape is diverse, and the vegetation varied from open sour grass hills to grassy acacia covered mountain slopes and even thick wooded stream bottoms. In some valleys, ancient Yellowwoods and wild olive trees formed a safe haven for several species including Cape Kudu, Eland and Bushbuck, to name a few.

The lodge commanded a stunning view of the Baviaans Valley and was central to most of the conservancy.  My guide John and I would start in the morning by spending our time reconnoitring the high mountains in the backcountry to identify where the largest rams lived. Being an extremely territorial animal,  once we spotted any decent specimens, we could return at some point to his home range to find him again. We had a lot of ground to cover, and so for the next three days, we traversed the conservancy, until we had found what we believed to be the best two rams of the many we had seen.  We had looked at no fewer than 20 rams.

The experience of hunting Vaal Rhebuck

After discussing which one we would try for first, we both agreed that we would attempt stalking the ram that ran with six females about 30 minutes from the lodge. John estimated his horns to be around 9 inches long and extremely thick at the base.  After lunch, we were off and drove along a gravel road that snaked it’s way through some smaller hills until we arrived at a place where we could study the vast mountain slopes without disturbing the group of Rhebuck.  Along the way, we stopped to talk to a stockman on horseback and explained our plan so he would keep out of the area. We explained the place where we had seen the ram and the old man nodded his head. He told us that often he had seen this group of Rhebuck come down from the mountains in the late afternoon and feed near a spring in the valley below where the grass was much more palatable. This information gave us a great strategy to work on.

We drove to the cover of some tall trees, and here we left the vehicle to begin our stalk.  Before setting off, We glassed the open green slopes almost a mile away. After about 15 minutes,  I saw the head of a female, her pointed ears sticking out of the grass. It was still early and they had not begun their descent down the mountain yet. We had time so would need to be patient.

There was a small river which had eroded considerably and was deep enough for us to sneak undetected for the first 300 yards. Once we were at the end, I raised my binoculars slowly over the river bank. They had all stood up and the females fed as the ram stood alert, his eyes scanning for any sign of danger.  We had come as far as we could for now, and due to the lack of cover ahead, we had reached a stalemate. The Rhebuck would need to make the next move.

We lay in the warm afternoon sunshine for a full hour before finally, they started to graze their way down the hill.  Then as luck would have it, they disappeared behind a small ridge. This was our chance. Waiting for the last females head to disappear,  we sprinted the last 100 yards to an earth embankment. From this position, we should be able to take the shot. We waited several minutes before they reappeared from a gulley.   They now all stood, staring nervously down the valley. Still, we lay, not moving at all. It was getting late, and the wind had begun to swirl in all directions. We could not shoot as the slightest movement would give us away.

Then from across the valley, a Baboon barked loudly. He had obviously spotted us. Their heads all picked up at once. As luck would have it the old ram turned and faced up the hill, they had just descended. Slowly I set the rifle on its tripod and quickly found him in my scope. As I  squeezed the trigger, the whole valley echoed around us. The thud of the bullet took seconds to reach us as he sank into the knee-high grass. We lay there for a few minutes just in case he found his feet. The Baboons shouted angrily from the top of the ridge, as we ambled up to the spot they had been standing.

He was a tremendous specimen and sported a few large scars, testament to the vicious battles he had endured to remain the monarch of his range.

Today he stands, full mounted in my trophy collection amongst the rest of my mountain trophies from across the globe.

To join us for some great free range hunting of indigenous Vaal Rhebuck in the Eastern Cape, please email hunt@crusadersafaris.com or contact us here.